What it means to have Artificial Intelligence

Before getting to know Artificial Intelligence, let’s start with defining what intelligence is. According to Wikipedia, Intelligence is the ability to perceive or infer information, and to retain it as knowledge to be applied towards adaptive behaviors within an environment or context.

What is Artificial Intelligence?

Artificial Intelligence is a branch of Science which deals with helping machines find solutions to complex problems in a more human-like fashion.

The Goals of AI is to:

Artificial Intelligence should have been just AI but due to the current buzz and using Machine Learning and Deep Learning synonymously with AI, we came up with three terms: Classical AI, Narrow AI and Artificial General Intelligence.

Narrow AI is designed to perform a single task and the machine gets very good at performing that particular task. However, once the machine is trained, it does not generalize to unseen domains. This is the form of AI that we have today.

Artificial General Intelligence (AGI) is a form of AI that can accomplish any intellectual task that a human being can do. It is more conscious and makes decisions similar to the way humans take decisions. AGI remains an aspiration at this moment in time with various forecasts.

How old really is AI?

While it’s hard to specify exactly what was the first artificial intelligent agent, Babbage’s Analytical Engine is probably the best candidate. It doesn’t have any special “adaptive” capabilities but quite flexible nonetheless.

From 1957 to 1974, AI flourished. Computers could store more information and became faster, cheaper, and more accessible. Machine learning algorithms also improved and people got better at knowing which algorithm to apply to their problem. In 1970 Marvin Minsky told Life Magazine, “from three to eight years we will have a machine with the general intelligence of an average human being.”

Currently the experts predict a more lenient timeline, thirty to eighty years from now. These predictions stem from our understanding of what intelligence is at that specific moment in time and also it revolves around the tools we have at hand.

For example, in 1997, reigning world chess champion and grand master Gary Kasparov was defeated by IBM’s Deep Blue, a chess playing computer program. But the same computer program can’t differentiate between a blue and a red ball, a task that even toddlers excel at. Google’s Alpha Go defeated Chinese Go champion in 2017, exactly 20 years afterwards. We haven’t got smarter about how we are coding artificial intelligence so the only thing that changed in the 20 years is the limit of computer memory and speed. And now, we are living in the age of “Big Data”. You would have read about how data is the oil of artificial intelligence. If your model is not performing well, throw more data at it and hope it works out.

Well, I think it’s time we move from oil to solar or fusion.

For the AI optimists, I tell the story of Ernest Rutherford, a nuclear physicist. On September 11th, 1933, he said, it would never be possible to extract atomic energy from atoms. So, his prediction was ‘never,’ but what turned out to be the case was that the next morning Leo Szilard read Rutherford’s speech, became annoyed by it, and invented a nuclear chain reaction mediated by neutrons! Rutherford’s prediction was ‘never’ and the truth was about 16 hours later. Rutherford is the father of nuclear physics, if you can’t relate to nuclear physics or the fact that his work resulted in 8 Nobel prizes in Chemistry and over 50 Nobel prizes in Physics, I am sure you can relate to your LCD, LED displays at home and these resulted from his work. So take the AI predictions from experts with a grain of salt.

Where does Machine Learning and Deep Learning fit into in AI?

The field of Artificial Intelligence is growing rapidly and due to the buzz in the recent years Machine Learning and Deep Learning are synonymously used with AI even thou they are only a subset of AI. 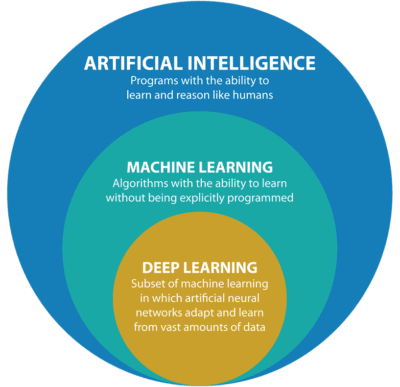 Machine learning is an instrument in the AI symphony — a component of AI. Machine Learning is the ability for an algorithm to learn from prior data in order to produce a behavior.

Is Machine Learning or Deep Learning the only way forward?

Machine learning is different from a fully-AI system in the way that it does not know what it was trained to do. For example, an AI system can identify spams but it will never be able to tell why it is doing that. Or if a new type of email comes in, it will fail to understand it.

Researchers whose work is grounded in deep learning tend to think that future progress would be made using neural networks, the workhorse of contemporary AI. Those with a background in other parts of artificial intelligence feel that additional approaches, like symbolic logic, would be needed to build AGI. Either way, there’s quite a bit of polite disagreement.

Current culture of shipping quickly with a minimum viable product may work at startups but for AI, you must go slow to go fast.

So, I would like to end this article with one of my favorite quotes:

“If I had asked people what they wanted, they would have said faster horses.”- Henry Ford

I say it is high time we look for a new energy source for AI and invent a fusion powered car.

Now that AI is moving out of the laboratory and into offices and homes, a number of questions are more important than ever and the most important is, what is an Artificial Intelligence problem look like?

So, I am going to give you three advices. If you are an engineer you care about accuracy, squeezing the last percentage of performance out of the model, but a problem is defined by more than the accuracy you get, unless of course it is a research problem and your goal is to get a higher accuracy but if it is a business problem, I am sorry to say, no one cares about your accuracy in the world, what they care is about the business and financial value your solution can create so my first advice, ask yourself, “What is it about my problem that means an AI is the best, or even only solution?”. A problem you can prototype easily and measure the value it can create, and if you only can create that much value using AI, then it is an AI problem.

Second, AI needs a lot of data to function and you need a data infrastructure to solve advanced machine learning problems. But don’t go hunting for tons of data, start with whatever you have, build a minimum viable product, measure with the data you have what accuracy you get and then go on and collect more refined data.

Third, to know if AI can be a solution to your problem, you need to know atleast the basics of AI. Because, if you see a problem in your business, you have the advantage no other AI expert has, industry knowledge and remember AI is a tool, all you need to learn is how to use the tool.

So, where to next, Einstein wouldn’t have been able to come up with the theory of General Relativity if he didn’t perfectly understand the Newtonian Mechanics to see the flaws in it, like so, in this blog, I hope to educate you about the fundamentals of Artificial Intelligence.

I would love to hear from you, if you need more explanations, have any doubts or questions, you can comment below or reach out to me personally via Facebook.

\[\color{Orange}{\text{“A candle loses nothing by lighting another candle.”}}🔥\]