What is the object detection problem?

The goal of object detection is to detect the presence of object from certain set of classes and locate the exact position in the image. We can informally divide all objects into two big groups:

To check whether the detection is correct, we compare the predicted bounding box with the ground truth bounding box. The metric is intersection over union.

What is Intersection over Union?

How do you compare performance of multiple detectors?

To compare two detectors correctly, you should compare their precision-recall curves. If one curve is generally higher than the other curve, then the first detector is better than the other. To measure the overall quality of the detector with one number, we compute average precision.

Another charting metric used is the plot of a miss rate with false detections per image. The curve is constructed similar to the precision-recall curve by varying the threshold on the detection score. 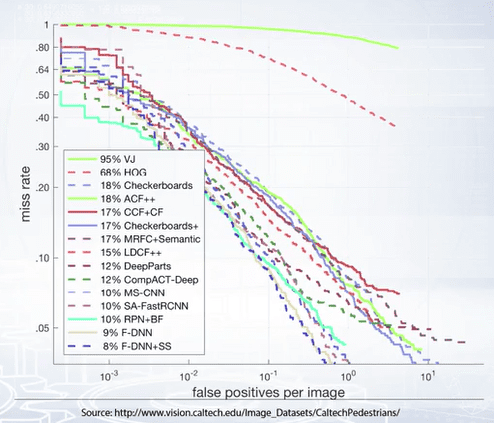 What are some of the detectors?

What are sliding window detectors?

The main technique to reduce the problem of detection to image classification is sliding window. Consider a fixed size rectangular window, and you start sliding the window across your images, looking for the object you are trying to detect and asking the question “is Object?”. We mark all windows the classifier has said yes.

What are some challenges with sliding window detectors?

Q2. How to handle various aspect ratio of objects?

Q3. A lot of windows will have overlapped objects, so for each object you’ll get multiple positive responses, how to deal with this?

Solution: Score map of specific scale can contain multiple responses of various strength. To obtain final detection, we usually select points of local maxima, this non-maximal suppression is similar to how we detected edges in image gradient maps.

Q4. What if the object is partially overlapped with other objects?

Solution: In this case, the classifier should be really powerful to detect partially overlapped object, or we have to occupy only a small portion of the window.

What is a Histogram of Gradients detector?

The idea of HOG detector is derived from using image edges as features. Image edges are robust features and sensitive to change in lighting. But edge maps, for example, Canny edge detector contain information only about modes of image gradients. Information about the gradient is lost in image maps.

Dalal and Triggs, in 2005 proposed to compute histograms of object gradients orientation and use them as feature of the image instead of edge maps. To do this:

What is Viola-Jones face detector? 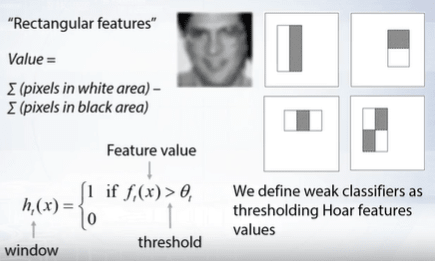 What are attentional cascades in neural networks?

CNN classifiers are very slow, so it is impractical to use them in sliding windows, but we can apply them as the last stage of attentional cascade. For example, we can use extension of Viola-Jones detector as proposal generator, and apply CNN only to the selected proposals. The next step is to replace all previous stages in attentional cascade to these neural networks. 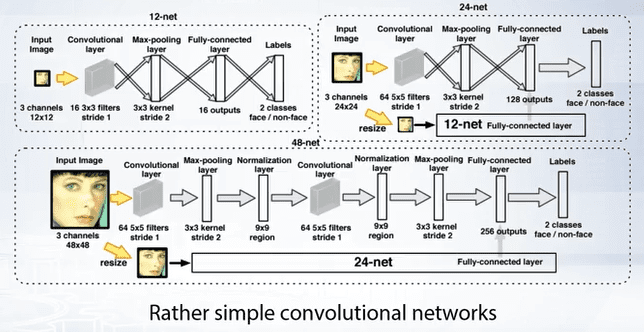 We can add separate neural networks after each stage of the Cascade to refine the bounding box of the proposal. In this particular algorithm, refinement of bounding box, is formulated as a classification problem. The classifier selects a transformation from a predefined set of transformations. Such classifiers are called calibration networks.

What is region-based convolutional neural network?

In seminal work of Girshick et al, it was proposed to use external object proposal generator to obtain object proposals per image. Features are then extracted with convolutional neural network from these proposals and classified with SVM classifier. This method is called region-based convolution network or R-CNN.

In R-CNN, a selective search algorithm was used. Selective search is one of the generic object proposal generation methods. Such methods can provide high recall rate but very low precision. Thus they cannot be used as object detectors themselves, but they can be used as a first step in the detection pipeline.

One very important advantage of R-CNN method is that it can use any convolutional neural network for feature extraction. You can improve the performance of R-CNN by using more advanced convolutional architecture. Thus switching from AlexNet to VGG leads to better mean average precision.

Problems with the R-CNN:

Why from R-CNN to Fast R-CNN?

Base CNN classifier used in R-CNN model due to fully convolutional layers requires an image with fixed resolution of 224 by 224 pixels as input. So, after objects proposals are extracted, they should be re-scaled to the fixed resolution, such a scaling changes object appearance and increased variability of images. But we can adapt any CNN classifier to various image resolutions by changing the last pooling layer, to the Spatial Pyramid Pooling or SPP layer. 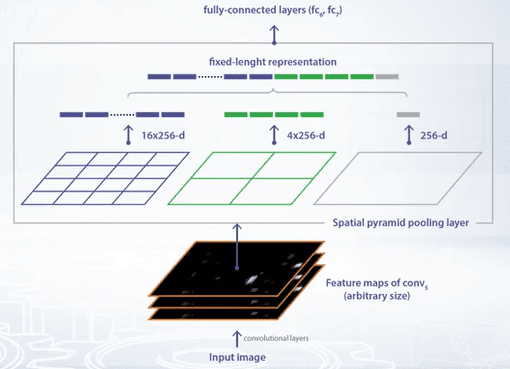 Spatial Pyramid is constructed on top of the region of interest. First level of the pyramid is a region of interest itself. On second level, the region is divided into four cells with two by two grid. On third level, region is divided into 16 cells on four by four grid. Average pooling is applied to each cell. So, if the last convolutional layer has 256 maps, then pooling in each cell produce one vector with length, 256. Feature vectors for all cells are concatenated, and then passed as input to the fully convolutional layer. Thus, we obtain fixed length feature representation for input images of various resolutions.

For each window, we apply Spatial Pyramid Pooling, and then compute fully convolutional layers for feature extraction. Compare this to computing convolutional features for each of the 2,000 object proposal. This leads to a dramatic increase in processing speed. In this Fast R-CNN paper, Girshick has proposed to use the Region of Interest Pooling layer, or ROI layer. It’s a simplified depiction of SPP layer, there is only one pyramid layer.

In addition to Region of Interest Pooling, two more modifications have been introduced.

Fast R-CNN can be trained to this multi-task loss:

This multi-task loss is the rate of sum of classification loss:

For the true class U, log loss is used. The smooth L1 loss is used for the bounding box regression.

Problems with the Fast R-CNN:

What is Faster R-CNN?

Faster R-CNN is Fast R-CNN plus Region Proposal Network. In Faster R-CNN, the last main problem of R-CNN approach is solved. The dependency from the external hypothesis generation method is removed. Objects are detected in a single pass with a single neural network. 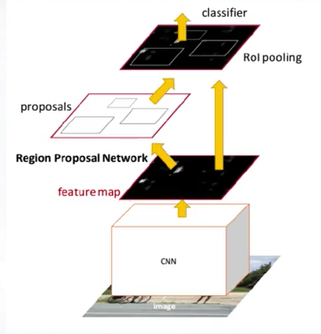 RPN is a simple fully convolutional network which is trained to its multitask loss, similar to Fast R-CNN, and serves as a proposal generator.

The Region Proposal Network is a small network that is slid over convolutional feature map. 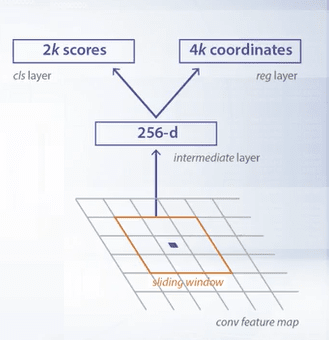 Proposal Network anchor is marked as positive example if intersection over union is larger than 0.7, or it reaches maximum for all anchors for this particular ground truth example. Anchor is marked as negative sample if IoU is lower than 0.3.

Problem with the Faster R-CNN:

We can solve this problem by training a set of RPN for various scales. Each RPN will take different convolutional layer or set of layers as input so the receptive field will be of different size. This will significantly improve detection of small and large objects so one Faster-RCN model can detect simultaneously objects from small to large sizes.

What is Region-based fully-convolutional network?

Region-Based Fully Convolutional Network is a modification of faster R-CNN, but it can be regarded as one of the meta-architecture of modern CNN-based object detectors.

The key idea for the regional-based fully convolutional network is to pre-compute box classifier features once for the whole image. Then crops are taken from the last layer of features prior to prediction. In this model, fully connected layers are replaced with convolutional layers.

To make strong classifier, a committee of region-based position-sensitive classifiers is built. For each class, k by k, position sensitive score on maps are generated by fully convolutional network. In a region of interest pooling, k by k grid is used. But for pooling in each cell, only one of the maps is used. In this light, used maps are visualized with different colors. Each positional sensitive feature maps predicts high confidence only if object is located at predefined position relative to the region of inter-cell.

Full regional fully convolutional network model contains RPN and region-based classifiers. All components of the model can be jointly trained to multitask loss. 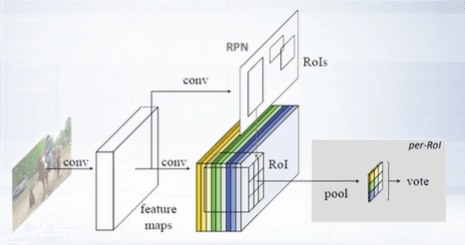 The main advantage of this meta-architecture compared to the faster R-CNN model is that it’s computational speed is weakly dependent on the number of proposals, which can significantly increase the number of the proposal whereas some RPN network show only moderate increase in computational time for the whole detector.

What is You Only Look Once (YOLO)?

The rationale behind calling the system YOLO is that rather than pass in multiple subimages of potential objects, you only pass in the whole image to the deep learning system once. Then, you would get all the bounding boxes as well as the object category classifications in one go.

The way YOLO works is by subdividing the image into an NxN grid, or more specifically in the original paper a 7x7 grid. Each grid cell, also known as an anchor, represents a classifier which is responsible for generating K bounding boxes around potential objects whose ground truth center falls within that grid cell (K is 2 in the paper) and classifying it as the correct object.

For more dense object detection, a user could set K or N to a higher number based on their needs. However, with the current configuration, we have a system that is able to output a large number of bounding boxes around objects as well as classify them into one of various object categories, based on the spatial layout of the image.

This is done in a single pass through the image at inference time. Thus, the joint detection and classification leads to better optimization of the learning objective (the loss function) as well as real-time performance.

How does 3D Object Detection work?

LiDAR and Depth Sensors gives 3D information of the world around it, which can’t be directly captured by passive 2D camera setup. The techniques we discussed are trying to detect the objects in the raw point clouds without any texture information (just with the representation of the position (x,y,z)).

There are few reasons why it is a good idea to look into 3D detection directly on point cloud:

A typical point cloud consists of four different values (x, y, z and r) corresponding to the x, y and z co-ordinates of the point of which the light ray was reflected off and r being the reflectance.